There are really so very few of them, when you think about it, these stories about the risen Jesus appearing to his disciples. There is the appearance to Mary in the garden at dawn, in front of the empty tomb; there is Jesus in the upper room among his disciples, speaking his peace to them and breathing the Spirit; Jesus cooking breakfast on the lake shore amid the mists of dawn; and this tale of him joining, unrecognized, the two disciples on their journey to Emmaus. Only a handful of precious stories, stories packed with wonder and joy and the sense of closeness to the one we love. That is not a lot to sustain the faith of the church over 2000 years. But it is enough.

Of these stories, today’s reading, the meeting on the road to Emmaus, has a special place in the imagination of many of us. Perhaps it is the relative obscurity of the disciples – it is easier to imagine us in the place of Cleopas and his unnamed companion, than to identify with the big name disciples like Mary or Peter. Perhaps it is because of the odd fluid way in which the stranger they have met suddenly becomes Jesus, as their eyes are opened to his presence. Perhaps it is because, of all the resurrection appearances, this one opens itself to the ways in which Jesus way continue to appear to us, to this day.

The two disciples in the story have come to a dead end. They have lived through the trauma of seeing the one they loved and trusted arrested and put to death in a brutal fashion. They are in shock, and in grief. Their hopes have been shattered: “we had hoped that he was the one to redeem Israel”. Even the strange and unsettling story of the empty tomb can do nothing more than stir up their pain even more. And now they have just given up. They have packed it in, and are heading home. It’s over.

So when this stranger appears and asks what they are talking about, what has happened that has so occupied and exhausted them, they can only stop walking, and stand mutely still, looking for words to sum up their pain.

And then the stranger begins talking to them, begins to speak of how all these things are in the Scriptures. He begins to interpret to them the things about himself in Moses and the prophets. This may not seem like the most sensitive and satisfactory pastoral response, to meet their grief and pain with a Bible study. But as he speaks to them, as he explains to them their religious heritage from a new perspective, refocusing it around God’s self-giving love and solidarity with the oppressed, a strange thing happens. Their hearts burn within them. The words he shares are not just an abstract teaching. They bring to life the passionate love of God, and call forth a responsive love in their own hearts.

And here is the first clue to the presence of the risen Christ in our lives: that we may meet him in Scripture. Whenever we read the things concerning him, the stories of his life and the passages that prefigure and interpret his coming among us, then he is with us. Not just as a character in the story to be listened to and learned; but as a living presence. When we hear and share these stories not just as lessons to be learned, but as something that makes our hearts burn within us, as stories of love and tenderness and compassion and courage, then the risen Christ is really among us, then we feel his living presence. And that is why we keep coming back, week after week, to read and discuss these stories together: in the hope that they will catch fire within us, that they will move from being information for our heads, to words of love that feed and inspire our souls.

Then, as evening comes and they invite the stranger in to share a meal with them, comes the moment of recognition. Seated at table, the guest becomes the host: he takes bread, blesses it, breaks it, and shares it with them. That is the moment their eyes are opened. Some stirring of a memory, some association with the many meals he shared with them: loaves and fishes on the hills of Galilee; dinner parties that included the marginal, the poor and the tax collectors and the loose women and the Pharisees; that final meal of just a few days ago, just before the nightmare started, when he shared bread and wine of signs of his self-giving. Something about his gesture at the table, breaking the bread, seemed to express so completely his life with them, that they recognize in this stranger the living presence of Christ.

This is a story also about how the risen Christ can meet us in the stranger, unexpected and unrecognized. Only when we let ourselves enter into the relationship, when we take the risk of hospitality and invite the stranger to stay with us, can our eyes be opened, and we recognize that Christ walks among us in the most unexpected places.

I want to share with you a picture I came across this week, that expresses beautifully the unexpectedness of Jesus’s presence in the stranger. It is by the Philippino painter Emmanuel Garibay, one of a series he entitled Emmaus. It shows the moment at which the stranger is revealed to be Christ himself. The particular twist in this painting is that Jesus has taken the unexpected form of a woman. As he/she reveals herself to the disciples, she is clearly hugely enjoying the practical joke she has just played on them. She shows them her hands pierced by nails with a laughing, “Hey guys, it’s me” expression on her face. The joy is infectious: the disciples are convulsed with laughter at this unexpected turn. 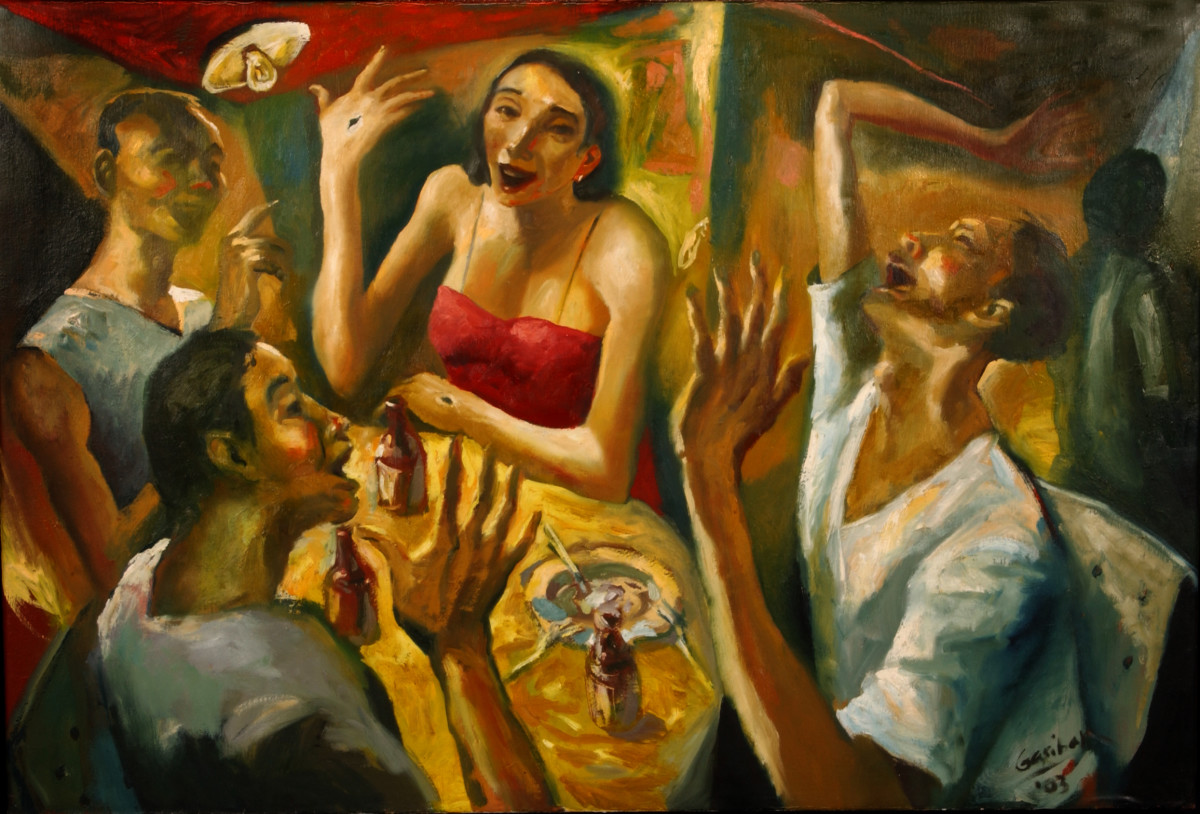 I love the bubbling laughter and unrestrained joy of this scene. It echos an old theological tradition that spoke of the resurrection as a practical joke Jesus played on Satan. The power of God at work in the world is not only wonderful and joyful and life-giving, it can also be deliciously absurd, overturning and subverting our expectations, making mischief with our ideas of the holy, upending the rule of death in a riotous celebration of life in all its possibilities.

The story ends with a bit of a joke of its own. Those two weary travellers, turning in because the day was far spent, are suddenly filled with new energy. They head back on the road immediately, covering those seven weary miles to Jerusalem in a wild moonlight gallop. Only to find, when they get there, that the earth-shattering news they came to bring has already arrived. The other disciples have seen Jesus themselves. How they must have laughed, in the giddy joy that has put all their grief and horror behind them.

God grant us the gift of joining in their Easter laughter, of learning to see Jesus in the most unexpected of places.